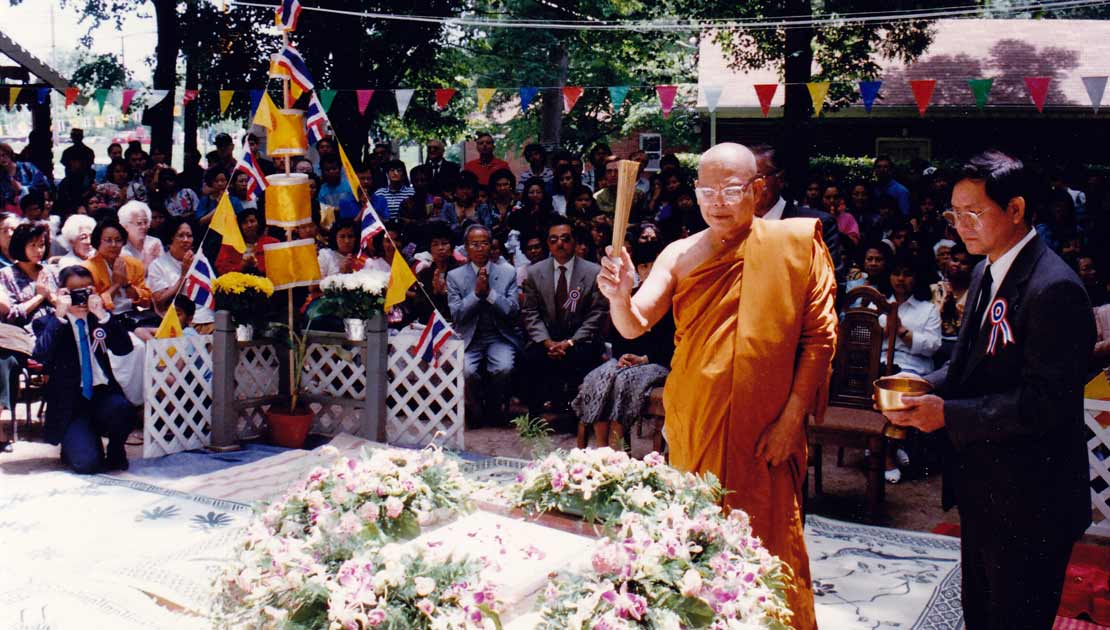 Wat Thai Washington, D.C. finally received an official permit to function as a place of worship on June 2, 1992.

The subcommittee signed a contract with Warder & Associates Inc. with the construction budget of US$1,143,883.00 and started the work on June 13, 1994. The mixed Thai style building had two stories with the dimension of 40 foot wide and 100 foot long. The upstairs houses a worship hall that is used for meditation practices and religious ceremonies with a capacity of 299 people. The lower level has a large open multi-purpose room with a capacity of 300 people that is used for social functions, meetings, and can also be partitioned into a number of classrooms. The construction was completed according to all the terms listed in the contract.

The monks and the temple committee orga­nized the grand opening ceremony on June 17-18, 1995 which included the Blessing of the Corner­stones and Sema Limit (marking the boundary). The chairman of the ceremony was His Excellency Manaspas Xuto, the Ambassador of Thailand to the U.S., and HRH Princess Chulabhorn Walailak kindly sent HSH Princess Vudhichalerm Vudhijaha to preside over the ceremony.

General Annual Meeting of the Council of Thai Bhikkhus in the U.S.A.

In this occasion the Council of the Thai Bhikkhus in the U.S.A. and Wat Thai Washington, D.C. co-hosted the 19th Seminar of the World Wide Missionary monks, and the 1995 General Annual Meeting of the Council of Thai Bhikkhus in the U.S.A. on June 15-16. The event was attended by the committee of the Council from various temples, venerable monks from Thailand, and many administrative and teachers from Maha-chulalongkornrajavidyalai University. By the order of Somdej Phra Phutthajahn (Kiao Uppasenama­hathera), the Region Chief of the Eastern from Wat Saket, Phra Dhammarajanuwatra from Wat Thai Los Angeles was the Sangha Chairman.