First Thai Buddhism in the U.S. introducing and opening 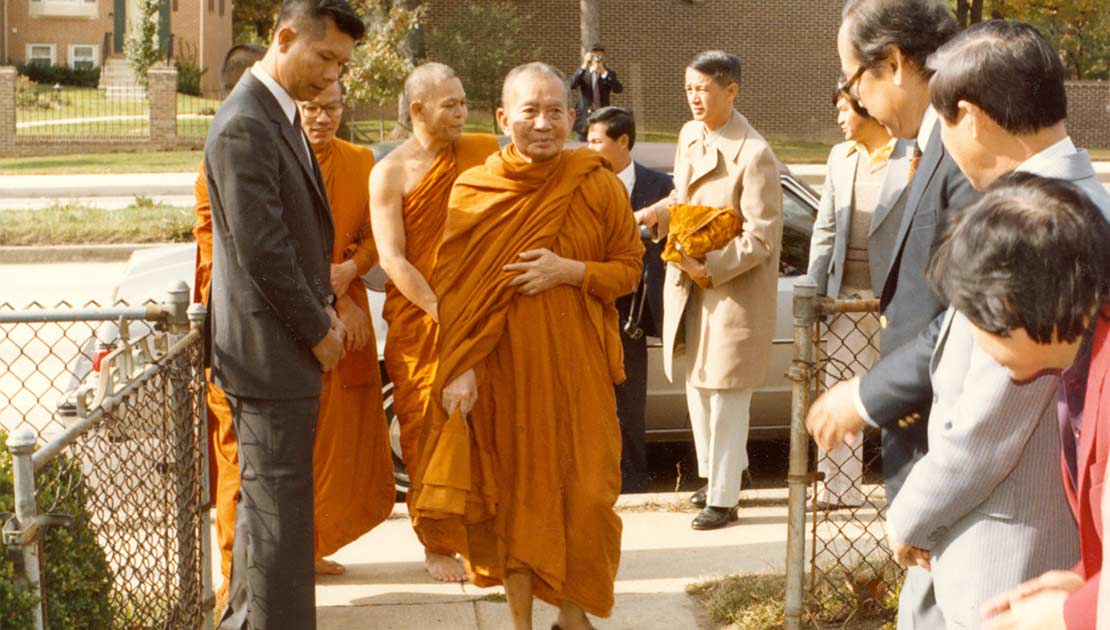 The promotion of Thai Buddhism in the U.S. by missionary monks started in 1969 with the journey around the world of Somdej Phra Phutthajahn (Aj Asapamahathera), the Director General of Wat Mahathat Yuwaratrangsarit, Bangkok while he was “Phra Bhimoldhamma”.

Later many venerable monks such as Somdej Phra Phutthajahn (Kiao Uppasenamahathera) from Wat Saket, Somdej Phra Maha Rajamangalajahn (Chuang Worapunyamahathera) from Wat Pak Nam, and Phra Bhramagunabhorn (Prayudh Payutto) traveled to the U.S. and other countries. Other groups of Thai Buddhist monks then started to travel abroad to establish temples or meditation centers as a gathering places for Thai communities abroad.

The initiative in establishing a temple for Buddhist residents in the local area began when several Thai communities in Washington, D.C., Maryland, Virginia, and neighboring states recognized that although this country was modern and developed in many ways, there was a spiritual void that only a Buddhist temple could fill. A temple would provide a place for Thai people to come and cultivate themselves by listening to the teachings of Lord Buddha and participate in religious ceremonies in a familiar spiritual environment and language.

The first president of the Association was Colonel Pramoch Thavonchanta, the Military Attache of the Royal Thai Embassy. The Ambassador of Thailand to the U.S., His Excellency Sunthorn Hongladarom, served as the first advisor to the Association which consisted of other fourteen members.

Upon the Ambassador’s return to Thailand, his successor, His Excellency Anand Panyarachun, assumed the role of advisor. The task of fund raising for a new monks’ residence was begun. The source of main income came from the donation of the general public.

Late in 1973, after Colonel Thavonchanta returned to Thailand, the Association invited Colonel Vichian Buranasiri, the Education Counselor of the Royal Thai Embassy, to be the president in November. Colonel Buranasiri reorganized the committee structure of the Association to facilitate its growth and progress.

In order to raise funds, he initiated a variety of activities and festivities  including the first Songkran festival which was held at the Ambassador’s residence in April 1974. Monks from the Thai temple in Los Angeles were invited to perform the religious ceremony at this festival. After Songkran the Association had raised a total of US$3,744.33 in its treasury.