The End of Lent, Ok Phansa 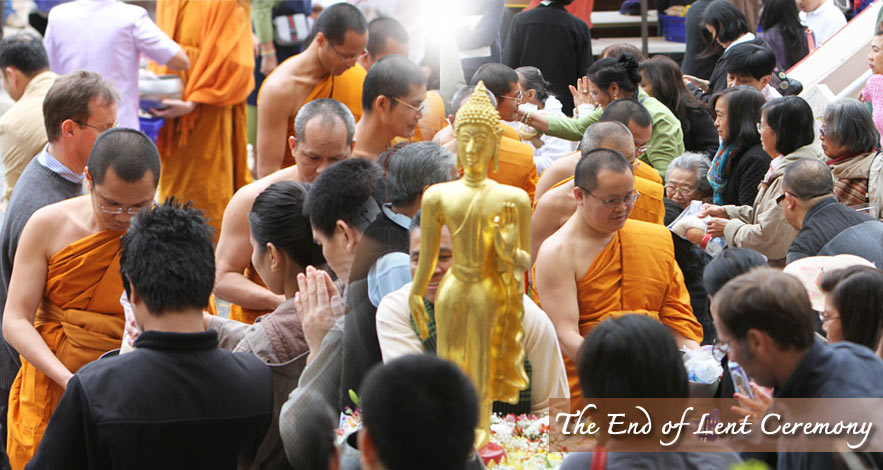 The end of the rains retreat is Ok Phansa, the full moon day of the eleventh lunar month (October). This is a festival day celebrated nationwide in Thailand, with spectacular events in the Northeast and in the South. After three months restricted to their temples learning Dhamma and practicing meditation, Buddhist monks once again return to their social duties. It is time for another big celebration, Ok Phansa. Thai Buddhists celebrate this occasion by offering food and lavish gifts to monks.

The legend of Ok Phansa has it that the Lord Buddha retreated to heaven to deliver a sermon to his mother, who had died seven days after his birth. After staying there for three months, he completed his mission and returned to earth. People welcomed his return with great joy and excitement. Even the gods and goddesses joined in the ceremonies welcoming the Buddha. Descending from heaven on the triple stairways of gold, silver, and precious gems were an assortment of angels, the monks who followed the Buddha to heaven, and the Buddha himself at the center. The people made special offerings of food, flowers, and gifts to celebrate his return. The place where the Buddha descended back to earth is called Sankasya, situated in northern India.

In many Ok Phansa ceremonies, a Buddha image is placed in a decorated cart and brought down a hill, a descent akin to the legendary one from heaven. People line up along the route and place offerings of food in large alms bowls before the image and also give food to the monks who follow.

The Ok Phansa celebration varies somewhat depending upon the region in Thailand. In the central region the ceremony is called “Tak Bat Devo,” which means “offering of food to the Buddhist monks.” The people in the South call the ceremony “Chak Phra,” which means the “pulling of the Buddhist monks.” Chak Phra is celebrated in southern provinces such as Nakhon Si Thammarat, Pattani, Phattalung, Songkhla, and Yala. However, the most impressive celebration takes place on the Tapi River in Surat Thani, where a float-pulling ceremony is organized both on land and in the river. People in the northeastern region also celebrate the occasion. Outstanding ceremonies in the Northeast include the Wax Castle Festival in Sakon Nakhon and the Lai Rue Fai Festival in Nakhon Phanom. Both are well recognized Ok Phansa celebrations. These events are made all the more impressive because of their traditional decorated boat races, cultural performances, and parades.