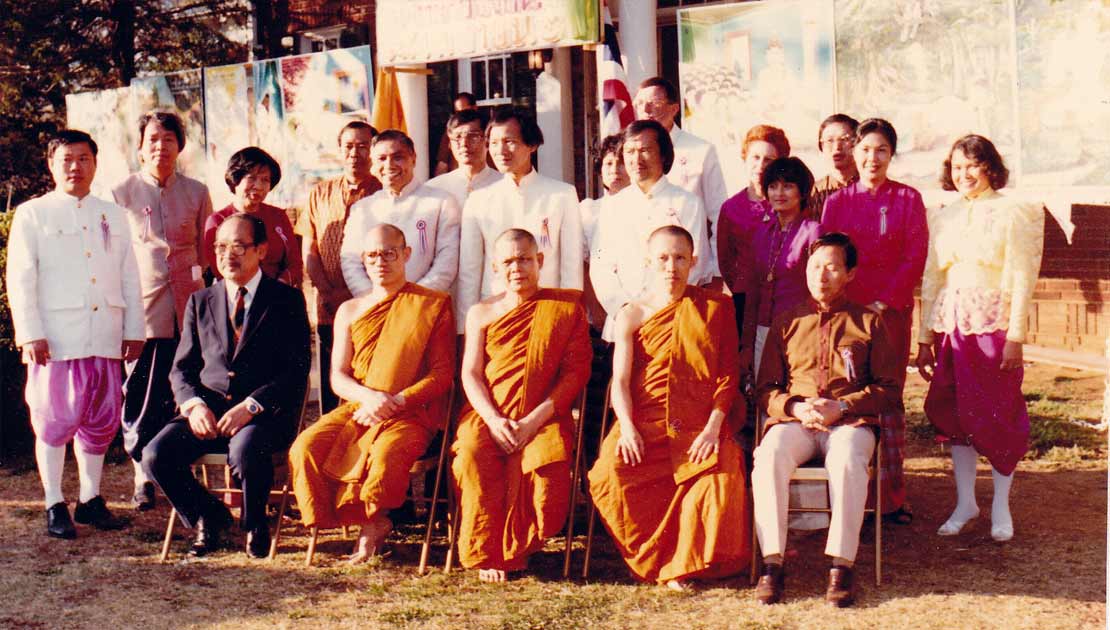 Having sufficient funds, members of the As¬sociation conceived the idea of first to establishing a monks’ residence and second to invite at least two monks from Thailand to perform religious ceremonies in order to increase the involvement and support of the Thai community in the area. In the Education Counselor’s meeting room on May 1, 1974 at 08:00 pm, the Association called for an open meeting with 28 participants who were government officials, students, and Thais of different occupations in order to obtain their opinions on this idea. Based on the comments and suggestions from this meeting, the Association agreed to use the funds in the treasury to carry out the proposal. A committee was formed and directed to find a rental place to be the new temporary monks’ residence. The committee finally found a house for rent at 705 Wayne Avenue, Silver Spring, Maryland. The rental agreement was one year and the monthly rent was US$350.00

Colonel Vichian Buranasiri, the president of the Association, contacted Phra Maha Sobin Sopago, the chief of monks at Wat Thai Los Angeles, California requesting for monks. Phra Maha Sobin then wrote a letter to Phra Dhamma Kosajahn (Chob Anujaree) of Wat Mahathat Yuwaratrangsarit, asking him to send monks to come and stay at the new residence. The new monks will lead in merit-making and others religious ceremonies on the first day of the Buddhist’s Lent, which would also be a grand opening day for the residence.

Three months later, in October 1974, Phra Maha Kliang Tejawaro was invited from the Thai temple in Los Angeles to assume the duties of Phra Palad Vorasakdi Dipangkaro who had returned to Thailand due to health issues. The invitation was made possible by Phra Maha Sobin Sopago, the chief of monks at Wat Thai Los Angeles, who was contacted by Colonel Vichian Buranasiri.

In January 1975, Phra Kru Phibulbodhabi¬ratana also returned to Thailand. On February 11, 1975, Phra Maha Surasak Chiwanantha of Wat Vajiradhammasadhit in Bangkok arrived to assume position of the Abbot following the invitation of Phra Maha Sobin Sopako and Phra Maha Kliang. Furthermore, he still holds this position today but under the new title of Phra RajaMongkolrangsi.

After the monks have agreed to stay permanently, the fundraising for the temple becomes more effective. Laypeople in Washington, D.C., Maryland, Virginia as well as other states were willing to donate funds to purchase the rented house. In July 1976, the Wayne Avenue house was purchased for US$52,500 by the Association.

However, within a few years, the need for a larger building became apparent. The house seemed too small for many religious ceremonies, especially in winter times when people have to gathering inside to perform ceremonies. Moreover the temple need to organized more activities for the communities such as Dhamma practice, Sunday school, Samatha and Vipassana medita-tion which all are very important tasks in promoting Buddhism.

In the middle of 1977, the Buddhist Association in Washington, D.C. had a meeting and decided that a larger building was necessary to establish a new temple. “The New Temple Committee” was appointed. The committee spent over three years searching for a proper place and submitted over ten sites to the Association to consider, but no conclusion was reached.