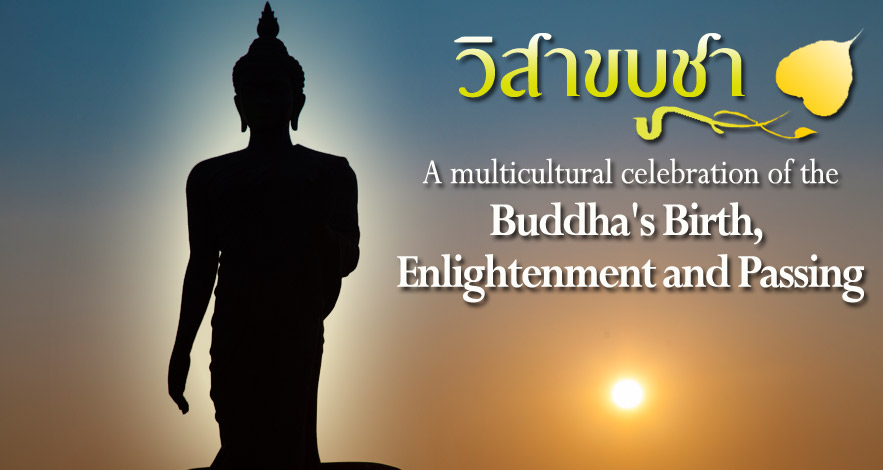 Meaning of the Term

Visakha Puja is one of the most important days in Buddhism because of three important events that it commemorates, i.e., the birth, the Enlightenment, and the passing away of the Buddha. These three incidents miraculously fall on the same month and date. Each year throughout the world on the Vesak full moon, Buddhist monks and lay people gather together to worship in a very special way and to recollect the wisdom, purity, and compassion of the Buddha.

The Buddha was a king by birth. His clan name was Gotama. He was born eighty years before the Buddhist Era in the Sakya kingdom at Lumbini Park (now called
Rummindei, in Nepal) in the Middle Country (Madhyama Pradesa, located between Kapilavastu, capital of the Sakya Kingdom, and Devadaha, capital of the Kolya Kingdom).   He was born on Friday, the Vesak full moon day in the year of the dog.  Prince Siddhattha (the Buddha’s personal name) was the son of King Suddhodana and Queen Sirimahamamaya.  On the day Siddhattha was born, Queen Sirimahamaya, who was pregnant, wanted to pay a visit to Devadaha, which was her native country.  On the morning of the Vesak full moon, the Queen left Kapilavastu to visit Devadaha. Approaching a lovely park of sal trees called Lumbini, located between the two capitals but nearer to Devadaha, the Queen decided to visit the park.   When she reached a sal tree, she started having contractions and soon gave birth to a son. When the kings of Kapilavastu and Devadaha learned of this, they became very happy and arranged a procession back to Kapilavastu.

Prince Siddhattha, raised in the midst of luxury, led the happy life of a privileged prince and at the age of sixteen married Princess Yasodhara, or Bimda, who bore him a son, Rahula.  He became discontent with courtly living and took up the life of a wandering ascetic at the banks of the Anoma River. He was then twenty-nine.  He studied the practices of the foremost Brahmin ascetics and realized that such practices were not the way to Enlightenment.  He went on his own way, applying the reflective thought of conscious meditation to a simple rational life of moderation.  At the age of thirty-five, he attained Enlightenment at Uruvelasenanigama subdistrict, Magadha State (today located at Bodh Gaya in the Bihar State of India) on Wednesday, the Vesak full moon of May, the year of the cock, forty five years before the Buddhist Era.

The Buddha passed away at the age of eighty on Tuesday, the Vesak full moon in the year of the small snake under the two sal trees in the Sal Grove of the Mallas in Kusinara, capital of the Malla State (today located in Kusinagara in Uttarapradesa, India).

The rituals of Visakha Puja Day had been continuously performed in Jambudipa, or India, the motherland of Buddhism, for a long time before Buddhism spread to Thailand and Sri Lanka. In these countries the Visakha worship has been continually observed to the present day.

In the Book of the Royal Twelve-Month Rituals, written by King Rama V, the Visakha Puja observance is said to have been revived in the year of the ox, B.E. 2360, in the Ratanakosin period in the reign of His Majesty King Prabuddhaleudlanaphalai
(Rama II). Under the advice of Somdeiphrasangharaja Mee (the Supreme Patriarch), the King reinstituted the Visakha celebration.
Rama II declared the commemoration of the Visahka Puja by Royal Decree. The King himself, observing the Eight Precepts, enjoined abstention from killing and the consumption of alcohol for three days. For three days there were bright lights, flowers, joss sticks and candles, and offerings to celebrate Visakha Puja.  There were also fireworks. In addition, people circumambulated the uposatha hall of the temple or a place of worship three times, and listened to Dhamma talks. They also made merit, offering food to the monks, donating things to the poor, releasing animals, and decorating their houses with lights.  These rituals have been observed ever since on the Vesak full moon day.

Activities Observed on the Day

1. Offering food to the monks and novices.
2. Going to temples for special observances and listening to Dhamma preaching.
3. Keeping the Five or Eight Precepts, including abstinence from alcoholic drinks and
all kinds of immoral acts.
4. The practice of meditation and mental discipline.
5. The practice of renunciation for a number of days at the temple, during which white
robes are worn.
6. Attending the triple circumambulation ceremony and other Buddhist activities.
7. Organizing an exhibition of the history of the Visahka Puja Day.
8. Hoisting the flag at houses, temples, and government offices.
The most important are making merit, giving donations, keeping the precepts and practicing meditation.

International Recognition of the Day of Vesak

In 1999, the United Nations, an organization performing various activities on behalf of the worldwide population, unanimously resolved to declare Visakha Puja Day (Vesak Day) an International Day on December 15, 1999. This action brought abundant joy to Buddhists across the globe, including Thais lay people and government officials. In this regard, the government sector, the Sangha, and lay people in Thailand have unanimously promoted the celebration of the Vesak festival throughout the country.

The Day of Vesak, or Visakha Puja Day, which means “worship on the full-moon day of the sixth lunar month,” is an important day of worshipping and merit making for Buddhists. On this sacred day, Buddhists all over the world commemorate three events in the life of the Buddha, namely, his birth, his Enlightenment, and his passing away.  These three events ccurred on the same day in the same month.  1) On the full moon day of the sixth lunar month, eighty years before the beginning of the Buddhist Era, Prince Sitthattha was born in Lumbini Park, a royal park that lay between the cities of Kapilavatthu and Devadaha. His birthplace is now called Rummindei, located in Nepal.  2) At twenty-nine years of age, Prince Sitthattha took up a life of renunciation on the banks of the Anoma River in search of the truth. After six years of searching, the thirty-five- year -old prince attained Enlightenment under a bodhi tree on the banks of the Neranjara River in Uruvelasenanigama.  This event occurred at dawn on the full moon night, forty-five years before the Buddhist Era. This place is now called Bodh Gaya, located in Bihar, India.  3) After His Enlightenment, the Buddha went on to teach the Dhamma for forty-five years until the night of the full moon in the sixth lunar month.  Then at the age of eighty, he entered into Parinibbāna in a grove of sal trees in Kusinara. This place is now called Kusinagara, or Karsia, located in Uttar Pradesh, India.
Buddhism remained strong even after the Buddha’s demise. About 324 B.C. King Asoka the Great sent out nine groups of Buddhist missionaries to propagate Buddhism in other lands.  These missions resulted in the flourishing of Buddhism in later times in countries such as Sri Lanka, Myanmar, Thailand, Cambodia, Tibet, Bhutan, Nepal, China, Japan, and Korea.

Buddhism has had a great influence on the improvement of mankind’s behavior, contributing to new conception of human conduct and spiritual well-being.  One of the oldest religions in the world, Buddhism has been a great spiritual refuge for over 2,500 years, and will continue to be so. The Buddha’s teaching remains a guiding force for man’s peace and serenity in life.

In November, 1998, at the International Buddhist Conference in Colombo, Sri Lanka, all the member countries unanimously expressed the intention to gain international recognition for the Day of Vesak, a celebration of the birth of Buddhism.  United Nations representatives from Buddhist countries, namely Bangladesh, Bhutan, India, Laos, Maldives, Mongolia, Myanmar, Nepal, Sri Lanka and Thailand jointly proposed an agenda to the U.N. General Assembly to adopt the resolution for the International Recognition of the Day Vesak.  On December 15, 1999, the Plenary Meeting of the U.N. General Assembly at its fifty-fourth session considered agenda item number 174 and adopted the draft resolution for the International Recognition of the Day of Vesak.  Appropriate arrangements were made for its observance at the United Nations Headquarters and other offices of the U.N. Thirty-four countries sponsored the draft resolution.
Since the year 2000, on that most auspicious day of the full moon in the sixth lunar month, the Day of Vesak, Buddhist countries all over the world have joined in the commemoration under the auspices of the United Nations. Each country takes a turn coordinating the event: Sri Lanka took the lead in 2000 and 2001, followed by Myanmar in 2002, India 2003, and Thailand in 2004.

Buddhism has long influenced the lives of Thai people.  Since the time of King Asoka the Great, many forms of Buddhism, i.e., King Asoka’s Theravada, Mahayana, Pukam Theravada, and   Lankavamsa Theravada, have developed within the   Thai kingdom and been embraced by Thais over many historical periods, the Phanom, Dvaravati, Srivijaya, Sukhothai, Ayutthaya, and finally the present Ratanakosin period. Buddhism has left indelible marks on Thai literature, architecture (as evidenced by the many fine temples in Thailand), and sculpture (as can be seen in the styles of Buddha images from many periods of Thai history).  All year long many religious traditions are observed, for example, Magha Puja Day, Asalha Pujja Day, Kathina, the ordination of monks and novices, and the offering of food to the monks. Buddhism is the national religion of Thailand, where presently the overwhelming majority of the citizens, about ninety-five percent, are Buddhist. There are 32,710 Buddhist monasteries and 352,651 monks and novices in the country. The King of Thailand is a Buddhist, and His Majesty studies, practices, supports, protects, and propagates Buddhism.
All the Thai Kings from the Sukhothai period to the present have attached great importance to the commemoration of the Day of Vesak. As a matter of royal duty, they have also encouraged their people to observe this sacred day of merit making when This all over the country give alms, pay a special attention to the Precepts of Right Conduct, practice meditation, and perform the triple circumambulation at the monasteries.

The Day of Vesak marks the birth, the Enlightenment, and the passing away of the Buddha. His birth heralded man’s deliverance from suffering. His Enlightenment was the discovery of truth, notably, the Four Noble Truths and the Law of Dependent Origination. His passing away marked the beginning of the Buddhist Era, during which Buddhism spread across the globe. The commemoration of the Day of Vesak by Buddhists everywhere aims to honor the compassion, the wisdom, and the purity of the Buddha, who taught humanity to be kind and tolerant towards all.  Truly these are qualities that foster world peace.